Christmas is upon us and while in Homestead it doesn’t feel like winter (unless your definition of winter is 80 degree weather and sandman’s) we are all trying to be enchanted by Saint Nick’s spell. Regardless there is a special theater bringing Christmas magic to Homestead. The Seminole Theatre has had many shows like “Rocky Horror” and “In The Heights,” selling out weekend after weekend. It has become a bright gem in the community. Tucked off the street of krome and 18 st the theater’s old school charm turns heads and has you feeling right at home. Although it may seem like I’m bias (I did perform there for 3 plays) I am excited to see how they bring the ghosts of Christmas alive.

I recently had the opportunity to sneak in (shush) and catch a glance of Act 1. I also got to speak to the director and a couple of the actors on scene a week before opening!

Speaking to the Director:

Me: What’s been the most challenging about bringing the script to life?

Director Zachary White: I’m gonna let you in on a secret. This is my first time directing ever. So the whole process really has been challenging trying to figure out how to put everything together, how to transition from being on the stage to being in front of the stage, but I had a lot of help. So I think that’s been the most difficult part of getting a feel for everything and the whole process. A couple other people who have directed before told me it’s not just telling people where to stand, it’s so much more than that. It definitely is so much more than that. And that’s been the hardest part is getting there.

Me: And the last question, what do you expect the audience to take with them when they leave?

Director Zachary White: A sense of wonder, a sense of  being impressed with the show and just keeping in the back of your mind that none of these people here are professionals. They’re all community members, they’re all people who are doing this for fun and in their spare time and that they’re bringing this show to you and I think the quality is great and that’s what they’re gonna be surprised about. That its great quality show from normal everyday people in the community. 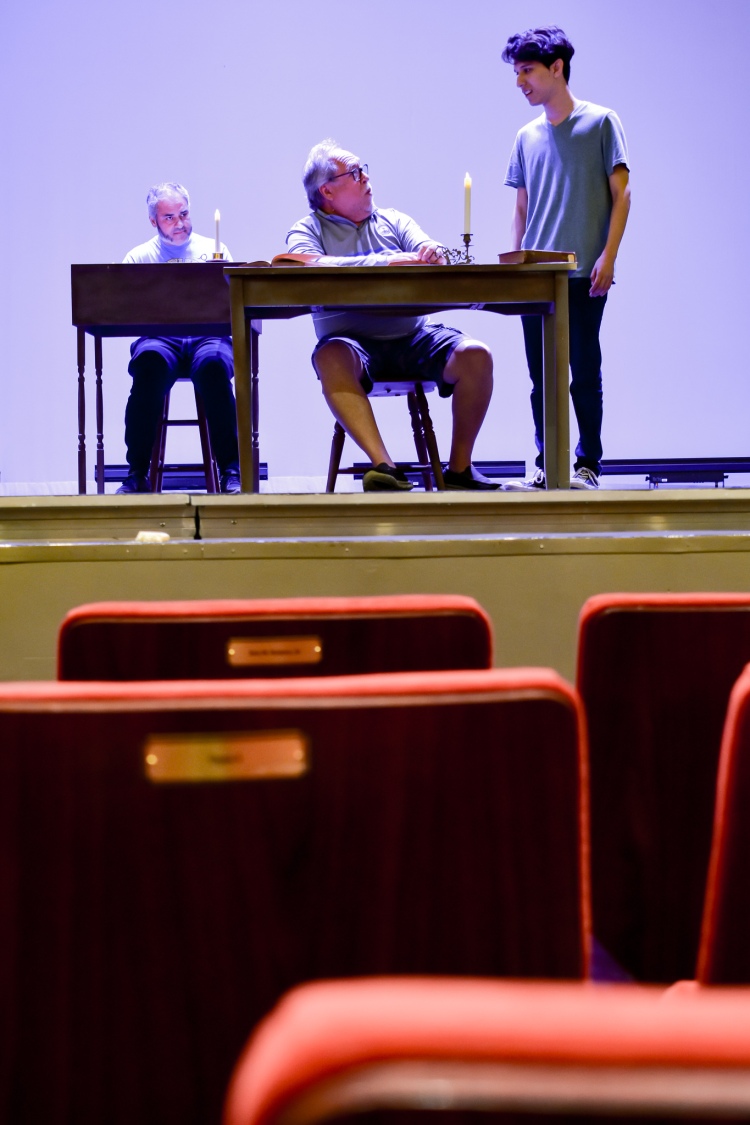 Louis: In more ways than I care to admit. I think each one of us has a little bit of Scrooge in us. And this a story of his redemption I think everybody can relate to that a little bit.

Me: What do you love about this character and what makes you be excited to play him?

Louis: His passion and his dispassionate, as negative as it is it gives me a chance to go ahead and just act it out and get it out of me. So in a way it’s good. It allows me to work out my own demons, let them all out here. So that I can be a nicer person on the street.

Me: What character do you play?

Me: Do you see any similarities between you and your character?

Candice: We’re both very festive. She loves Christmas obviously and this is the time of year when I come alive. So, I just really fell into that one because everybody well pretty much everybody except Scrooge is pretty happy about the season but she’s just very out there.

Me: So I’m assuming there hasn’t been any big challenges?

Candice: Not really. It’s not a very big part but she is very big, very larger, you know, larger than life. So I mean it wasn’t a stretch. It was like putting on your own shoes and then going and playing myself.

Magaly Perez as the Laundress

Me: What’s the biggest challenge that you’ve had doing this role?

Magaly: Um, I think getting the regional accent. So what was interesting is the man who I’m in the scene with, he’s actually from England. So he helped a lot with like picking out on specific vowels and stuff that I wasn’t getting.

Me: If you could play any other character in the show, who would it be?

Magaly: I think the ghost of Christmas present. He’s just like the most jolly with his lines but with the most serious undertone. The irony of his character makes me laugh. 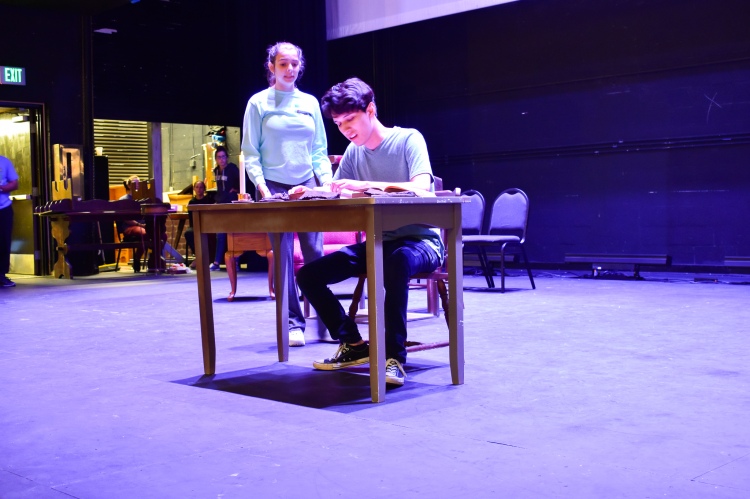 Me: Which character do you?

Me: Can you tell me more about your character?

Jose: Bob Cratchit. Scrooge’s clerk and I’m the one that he tortures on a daily basis and I’m also tiny Tim’s father, so we show him the meaning of Christmas, the Christmas spirit.

Me: Are there any similarities between you and your character?

Jose: Yeah, I am kind of loyal as is Bob Cratchit when he probably shouldn’t be. He probably takes a little more than I would take.

Me: First question is which character are you?

Me: Wow! Which is your favorite character out of all of them?

Austin: Have to say Matthew Cratchit because he gets more emotional and he has more lines.

Me: If you could play another character who would it be?

Austin: In this show, this show I would like to be the narrator. He has more lines and tells the whole story to the audience. 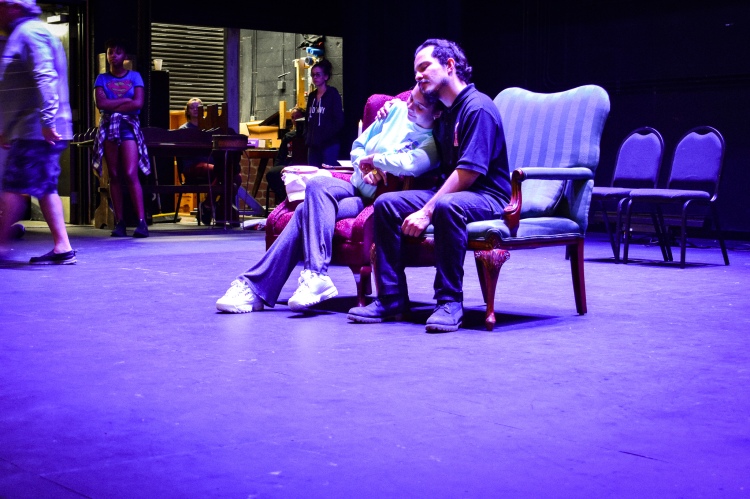 I had a wonderful time spying on everyone and enjoying Act 1. There is a lot of talented people in the cast and I can’t wait to see the full show! I also got to see a glimpse of the set design and I think everyone is going to be surprise. Every show is getting bigger and better and I’m glad I’m here to witness it.

The show kicks off this upcoming weekend until the 30th! All tickets are $15! Grab them while you still can! 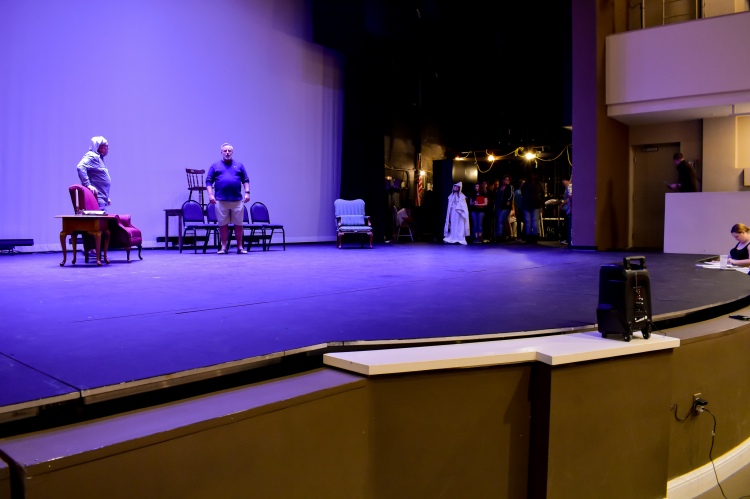